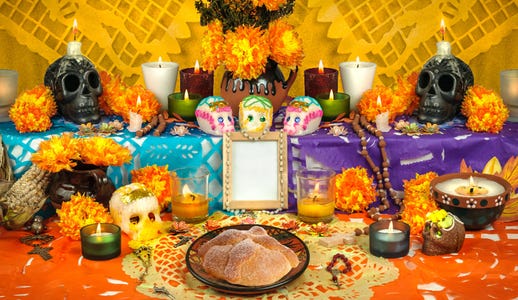 Death has an important meaning in all cultures around the world. There are many rituals and customs to honor Life and preserve the memory of those who have passed away. The Day of the Dead, which originated from a mix of pre-Hispanic and Spanish Catholic traditions in Mexico, is one of the most colorful and popular traditions surrounding death.

Read on to learn more about how people celebrate the Day of the Dead in Mexico, the United States, and worldwide.

What is the Day of the Dead?

The Day of the Dead is one of the most important traditions in Mexico and some parts of the United States; however, the most significant rituals of this celebration trace back to pre-Hispanic times. There is evidence that when a person died, the Mexica placed an offering in their honor to facilitate the soul’s arrival in Mictlan–or any of their other four heavens.

When the Spaniards arrived in America in the 16th century and evangelized the indigenous people, they introduced their own tradition to commemorate the dead: the celebration of All Saints' Day every November 1. It’s during this time that pre-Hispanic and Spanish traditions began mixing together, and what we now know as the Day of the Dead celebration emerged. Offerings are no longer placed to guide the deceased souls on their journey to the underworld but to guide their temporary return to the world of the living, where we honor their memory.

Why do we celebrate it?

There are several reasons why the Day of the Dead is so celebrated in Mexico and other parts of the world. This includes the colorful customs such as offerings or altars of the dead, which attract the attention of tourists from around the world. There is also the delicious traditional cuisine, in which the highly popular Pan de Muerto–Bread of the Dead–stands out. But, undoubtedly, the main reason this date is so important is because of the value we give to all loved ones who have perished. Through the rituals and customs of the Day of the Dead, we honor the memory of our faithful departed in a collective way rather than as a family or individual activity.

Keep in mind: In 2008, the United Nations Educational, Scientific and Cultural Organization (UNESCO) declared the Day of the Dead as an Intangible Cultural Heritage of Humanity, emphasizing "the importance of its significance in that it is a traditional expression that is both contemporary and lively at the same time, integrating, representative, and communitarian."

When is the Day of the Dead celebrated?

The Celebration of the Day of the Dead is actually two days long: November 1 and 2. First, the All Saints' Day, when children or "the little dead" are commemorated. And on November 2, the All Souls' Day, when those who died as adults are commemorated. However, in many areas of Mexico and the United States, it is common for this celebration to be combined with Halloween (October 31), making it a three-day celebration!

Where is the Day of the Dead celebrated?

Although the best-known traditions take place in Mexico, there are similar traditions that take place in a multitude of other countries. We’ll share more details on how the Day of the Dead is celebrated in various parts of the world.

It’s well known that the Day of the Dead is one of the most important dates in Mexico. However, the way it is celebrated varies depending on each region of the country. For example, one of the most visited celebrations is in Mixquic, a town located south of Mexico City, where a ritual called La Alumbrada is performed. Thousands of lit candles illuminate the tombs decorated with marigold flowers.

Another popular Day of the Dead celebration is held on the island of Janitzio, located in Lake Patzcuaro, Michoacan. There, in the Tzirumutaro cemetery, altars are set up, and songs and dances are performed, but the most striking thing is that Lake Patzcuaro is filled with canoes with candles that illuminate the waters offering a fantastic visual spectacle.

In Oaxaca it has been customary to organize exhibitions of altars of the dead, usually of large proportions since they are divided into steps. The first one is the offering to the family's grandparents, the second one to the parents, and so on until reaching the little dead. This traditional exhibition of altars of the dead has spread throughout the country and beyond its borders.

The celebration of the Day of the Dead in the United States is becoming increasingly popular and respected. This is largely due to the appearance of the Disney movie Coco (2017), with a theme that takes place during this holiday, but mostly because the huge Mexican community in the United States (more than 36 million) has been responsible for keeping the rituals and customs alive. Many families place altars with offerings in their homes, decorate the tombs in the cemeteries or hold parades where they dress up as Catrinas.

Within the United States, the Day of the Dead is most celebrated in:

Keep in mind: The Mexican Embassy in the United States and the different consulates throughout the country carry out important work to spread the Day of the Dead tradition with festivals, Pan de Muerto fairs, and exhibitions of Catrinas and cultural posters. Keep an eye on the embassy's social networks to learn about the forthcoming events.

Thanks to the mixture of the Spanish Catholic culture and indigenous communities, other variations of the celebration of the Day of the Dead have emerged in Latin America. Some of the most important are:

In Jujuy, a province in northern Argentina, this celebration is known as the Day of the Souls. People usually make offerings that include the departed's favorite food and visit the cemeteries to decorate the graves of their loved ones.

In Bolivia, the Day of the Dead is associated with the Andean culture, which considers death as part of life and not its end. That is why, when a person dies, the Andeans say that the departed have started a new journey. Also, according to their beliefs, on November 1 the spirits–ajayus–return from the mountains to bring fertility, as this date matches the planting season.

The Bolivian celebration of the Day of the Dead is similar to that of Mexico. They also place an altar, known as apxata, which they decorate with flowers, sweets, fruits, candles, and the tantawawa: a human-shaped bread that represents the deceased person.

In Ecuador, the Day of the Dead is celebrated by consuming two traditional foods: bread guaguas and colada morada. The former are human-shaped biscuits, and their preparation has its origins in a pre-Hispanic ritual in which corpses were dug up to parade through the towns. When the Spaniards arrived, this type of ritual was prohibited, and the preparation of bread guaguas was an alternative they found to keep the tradition alive. The colada morada, on the other hand, is a drink that originated in the same tradition, since during those same dates the natives used to drink a corn drink mixed with llama blood, an animal considered sacred.

Of all the dates on which the Day of the Dead is celebrated, the most important in Guatemala is All Saints' Day. On this day, it is customary to eat fiambre, a food of Mayan origin that mixes vegetables and cold meats. But the most striking tradition is to fly giant kites–papalotes–in cemeteries. According to local beliefs, these kites prevent the souls visiting the world of the living from being disturbed by evil spirits during their journey.

Rest of the World

There are also traditions outside the American continent that celebrate the memory of the dead whose origin is not related to the Spanish Catholic culture. Some of these traditions are:

In China, there’s the Festival of Hungry Ghosts, “Ching Ming”, which is celebrated on April 5th. On this day, families clean the tombs of their ancestors and arrange them with offerings. They also hang willow branches on the doors to symbolize light and the end of darkness and burn money as a symbol of attracting prosperity. On this date, only cold food may be eaten after the offering as it’s forbidden to light a fire for cooking.

In India, there is the day of Mahalaya Amavasya. This date changes every year depending on the moon cycles, but regularly falls in the first fifteen days of September.

On this day, religious rites are performed in which the souls of the past are invoked and peace is prayed for. It is also common to listen to mantras and sacred hymns on the radio.

In Thailand, the holiday equivalent to the Day of the Dead is Boon Para Wate: a Buddhist festival celebrated between May and July. During this day, young people dress up in masks to play pranks while a musical procession occurs. At the same time, monks recite the story of the last reincarnation of the Buddha.

Day of the Dead Traditions 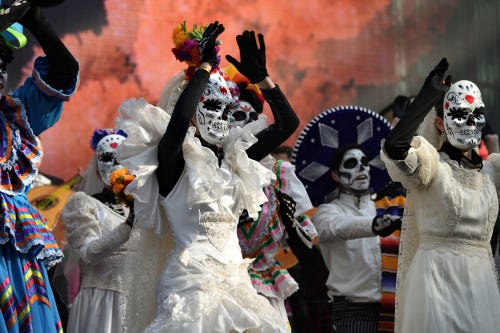 To better understand how the Day of the Dead is celebrated, it is necessary to know the different rites and customs that take place on this date. The most important ones are:

The most representative symbol of the Day of the Dead is the skull. At this time of the year, many people place make-up on their faces to appear skull-like: a custom inspired by the engravings drawn at the beginning of the 20th century by José Guadalupe Posada, the Mexican artist who invented the popular character of the skull “La Catrina.” However, two other Day of the Dead customs share the name calaveras (skulls):

The placing of offerings is one of the oldest customs of the Day of the Dead, dating back to pre-Hispanic times. As mentioned above, the Mexica placed offerings to their dead to help their souls reach paradise. There were two types of objects in these offerings: those that belonged to the deceased in life, and those needed during their journey to paradise. For this reason, the offerings were filled with musical instruments, vessels, sculptures of gods, seeds, jade stones, and food. A curious fact is that, according to pre-Hispanic beliefs, the xoloitzcuintles dogs guided the deceased during their passage through the underworld, so they were sacrificed and buried with the people.

The tradition of the ofrendas evolved into placing altars dedicated to the dead, meant to guide the souls back to the world of the living every Day of the Dead. The offerings can be of all possible size and shape. Some of the most common are:

Although it has only been held for a few years, the Day of the Dead Parade is attracting more and more tourists to Mexico's capital city. It is also replicated in other cities in Mexico and the United States.

Many people anticipate the Day of the Dead for its traditional cuisine. Some of the best known typical dishes are:

Undoubtedly, the celebration of the Day of the Dead is one of the most striking and popular traditions today. We hope you have enjoyed this guide on how to celebrate the Day of the Dead and that it has helped you understand its importance in preserving the memory of loved ones who have passed away.

Are you planning to make an offering for your loved ones?

If you have more questions about this celebration or other topics, remember that you can consult our experts, who will be happy to assist you in our chat. Remember that SABEResPODER.