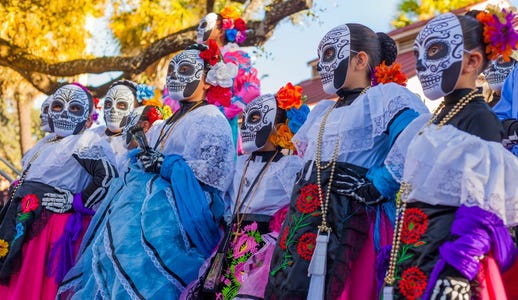 The Hispanic community in the United States is a diverse population, filled with colorful traditions that have stayed alive and thriving throughout the decades. Read on to learn more about these special traditions, and most of all, take pride in your Hispanic heritage!

Why is it important to preserve our Hispanic traditions?

When coming to live in the US, many Hispanic families seek to preserve the traditions of their home countries and teach them to younger generations. They can provide important benefits in the development of their cultural identity.

Hispanics have successfully preserved many traditions and have been able to adapt them to our environment. Here are some of the most popular Hispanic traditions in the US.

This date is also known as the Day of the Battle of Puebla, which occurred on May 5th, 1862. In this historic event, the Mexican army, commanded by General Ignacio Zaragoza, defeated the French army which was one of the most powerful of the time. Since then, this date reflects the courage of the Mexican people. However, this anniversary is not as celebrated in Mexico as it is in the US, where Cinco de Mayo is one of the most celebrated Hispanic traditions each year.

This celebration began in the US five years after the Battle of Puebla, when a group of Mexicans celebrated their victory in Texas, the birthplace of General Zaragoza. From that moment on, Cinco de Mayo began to be celebrated every year, and its celebrations spread to other cities in the country.

Over time, May 5th has become a date that symbolizes the struggle of the Hispanic community to overcome the challenges that its members experience as a minority. In other words, May 5th is a date to celebrate our Hispanic heritage and pride!

Anniversaries of the independence of Latin American countries

Among the most popular Hispanic traditions in the US are the independence day celebrations of Latin American countries. On these dates, many families gather to celebrate with traditional music and food. It’s also common for the embassies and consulates to organize cultural events to celebrate together.

Keep in mind: The annual celebration to recognize the contribution of the Hispanic community to American society began in 1968 under the name Hispanic Heritage Week. This was carried out in mid-September, during the week in which the independence of several Latin American countries are celebrated: September 15 (Guatemala, El Salvador, Honduras, Nicaragua, and Costa Rica), September 16 (Mexico), and September 18 (Chile).

The National Puerto Rican Day Parade is an annual tradition that takes place in New York on the second Sunday of June. The first time it was held was in 1958 in the neighborhood known as Spanish Harlem, although years later this celebration moved to Fifth Avenue.

Since then, the most common avenue in the Big Apple has become the scene of a great parade each year in which more than 80,000 people participate, filling it with floats, traditional Caribbean music, colorful costumes with which the Puerto Rican community in New York have expressed their national pride.

The Day of the Dead

The Day of the Dead has become one of the most popular Hispanic traditions in the US. This is due, in part, to the release of the movie “Coco” in 2017. This animated Disney film references this celebration - but also the devotion with which Mexicans celebrate this day.

During this day, it is customary to honor the deceased loved ones by visiting their graves and setting up colorful altars with gifts. Typically these are items that belonged to them or they were fond of, such as a certain type of flower, photographs, or specific food. It is also common for the Mexican Embassy and Consulates to organize parades, exhibitions, fairs, and other cultural events to spread the word about this celebration. 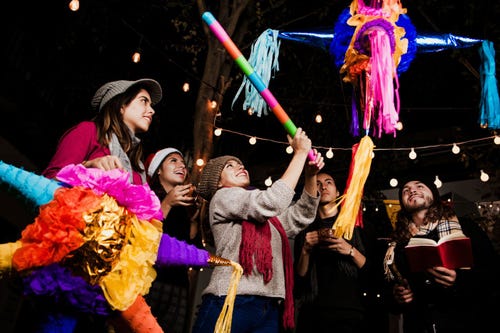 In these celebrations, the traditional Christmas food consists of tamales, rice pudding, fritters, chilenitos, and more. In the case of posadas, it’s customary to break a piñata, which is another of the most popular Hispanic traditions in the US.

We’re a community with wonderful traditions!

We’ve tried to highlight some of the most popular traditions our community holds dear, although there are undoubtedly many more. These include the celebrations of XV years parties, the organization of popular affairs, the celebration of carnivals, the Lottery games, the telling of legends like “La Llorona”, or the great diversity of food and traditional music.