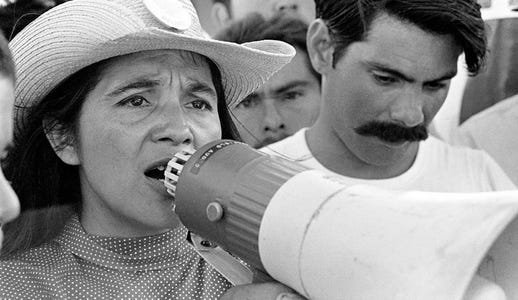 Throughout the decades, Latina women have had an important impact in U.S. history, despite gender inequality and racial discrimination. As part of our celebration of the Hispanic Heritage month, SABEResPODER wishes to recognize some of these brave, groundbreaking women.

Among the women we’ve highlighted, you’ll find social activists, doctors, politicians, lawyers, artists, and an astronaut! All of them are, without a doubt, great examples of perseverance, courage, and a strong sense of self. Read on to learn more about the lives and accomplishments of these inspiring women.

Dolores Huerta (1930-) is one of the most important figures in feminism and labor rights activism in the United States. She was born in 1930 in Dawson, New Mexico and was raised in Stockton, California, where she years later became the leader of the Community Service Organization (CSO).

In 1962 she founded - alongside César Chávez - the National Farm Workers Association, which later on became known as United Farm Workers (UFW). In this organization, Huerta was a key figure in achieving great advances in the recognition of the rights of labor workers. A clear example of her achievements was the enactment of the Agricultural Labor Relations Act of 1975 - the first law of its kind in the US - which gave California farmers the right to negotiate better wages and laboring conditions.

As her recognition as an activist grew, Huerta became more aware of the gender discrimination that exists in society and in the farmworker movement itself. At age 91, Dolores Huerta continues to support the feminist movement and fight for women’s rights. All these achievements make her indisputably worthy of appearing on our list of famous Latinas.

Learn more about Dolores Huerta in this video

Alexandra Ocasio-Cortez (1989-), a congresswoman of Puerto Rican descent, is currently one of the most influential people in American politics. In the 2018 elections, she ran as representative of the Democratic Party for a seat in the House of Representatives and at 28 years old, became the youngest woman to ever win that position. In 2020, she was re-elected!

Since then, AOC (as her followers often call her) has advocated for several progressive proposals, such as dismantling the border police, drafting a plan for the U.S. to use more clean energy, and increasing taxes on the wealthy. While criticized for her politics, she has become one of the most popular politicians in the country and one of the most prominent Latinas featured in the media.

Helen Rodriguez Trías (1929-2001)  was an educator, pediatrician, and activist for women’s rights from New York. She studied medicine in Puerto Rico, where her parents were from, and inaugurated the first medical center on the island dedicated to caring for newborns.

Years later, Rodriguez Trías returned to New York, where she began a long and successful career as a pediatrician and professor of medicine. Her work was characterized by her constant efforts to improve health services for women, children, and people with HIV/AIDS in the U.S. and across the most marginalized areas of Latin America, Africa, and Asia.

Helen Rodriguez Trías was the first Hispanic president of the American Public Health Association, and in 2001, she received the Presidential Citizens Medal shortly before her death the same year.

The life and accomplishments of Helen Rodrigues Trías

Sonia Sotomayor (1954-) is the first woman of color and first Hispanic appointed as Supreme Court Justice of the United States. She was born in Brooklyn, New York, to a Puerto Rican migrant family and studied at both Princeton and Yale universities. During her studies, she was involved in Latino activist groups, such as the Puerto Rican Action Initiative. In 1980, she graduated as a lawyer and began a long and successful career as a lawyer and judge. In 2009, she made history as the first woman of color and first Hispanic to be appointed Associate Justice of the United States Supreme Court. This immense achievement has made her one of the most influential women in the country. Throughout her 40+ year-long career, she has advocated and fought for women’s rights, the Hispanic community, and other minority groups.

Gloria Anzaldúa (1942-2004) was a Chicana lesbian writer, philosopher, and feminist from the Rio Grande Valley of Texas. Born into a family of migrant farmworkers from Mexico, Anzaldúa lived a childhood full of economic hardship, racism, and sexism. Despite this, she overcame gender, ethnic and sexual orientation-based discrimination based and became a renowned scholar and writer. She published many important books, such as “Borderlands”/ “La Frontera: The New Mestiza” (1987), which reflects on social inequalities along the Texas-Mexico border.

Gloria Anzaldúa passed away in 2004 from diabetic complications, but her works on cultural, feminist, and queer theory are still celebrated today by feminist and LGBT communities on both sides of the border.

You can learn more about Gloria Anzaldúa in this video

Dulce Matuz (1984-) is a well-known immigration activist and “Dreamer”. Born in the northern Mexican state of Sonora, she came to the United States at age 15 and faced many obstacles due to her immigration status. In 2007, an Arizona state law passed that denied Dreamers the ability to pay state resident pricing tuition at public universities. A Dreamer herself, Matuz began to get involved for Dreamers’ immigration and educational rights in 2009. She co-founded the Arizona Dream Act Coalition (ADAC) and participated in many marches and protests, from which she received national notoriety. By 2012, her impact led her to be recognized by TIME magazine as one of the most influential people of the year.

Although Dulce Matuz is now an American citizen, she continues to actively participate in the fight for immigration rights. Her dedication to Dreamers and her commitment to change makes her an important person to recognize.

Learn more in this interview with Dulce Matuz

Dr. Ellen Ochoa (1958-) made history as the first Hispanic woman to travel to space! This incredible achievement has led her to be awarded the Exceptional Service Medal by NASA and to be inducted into the Astronaut Hall of Fame.

Ochoa was born in Los Angeles, California, to a Mexican American family (her grandparents were from Sonora). From a young age, she was an outstanding student and excelled in math and science. She earned a bachelor's degree in physics from San Diego State University and a master's degree and a doctorate in electrical engineering from Stanford University. While finishing her doctoral degree, Ochoa applied to become one of NASA’s Astronaut Candidates and was accepted in 1989. Four years later, in 1993, Ellen Ochoa made history by becoming the first Hispanic woman to travel to space, an achievement she repeated in three later missions. Dr. Ochoa’s excellence in science and achievements as the first Latina astronaut have left an incredible mark on American history.

Chilean writer Isabel Allende (1942-) is one of the most widely-read novelists of recent decades. She was born in Lima, Perú, where her father worked as a diplomat, and grew up in Chile, where she worked as a journalist for several years. However, in 1973 her fate changed when her uncle (former Chilean President Salvador Allende) was killed, forcing her and her family to flee the country.

Isabel Allende published her first novel in 1982 called La casa de los espíritus (The House of the Spirits), which became a best-seller. During her 1988 book tour for De amor y de sombras (Of Love and shadows), she traveled to California for the first time and was so enamored she decided to make it her home. In her distinguished career, Allende has written over two dozen books and has gained recognition as one of the most successful writers in recent times.

Someone we can't leave out of our list of famous Latinas is the Puerto Rican singer and actress Rita Moreno (1931-). She was born in Humacao, Puerto Rico, but moved to New York when she was a child following her parent's divorce. In the 1950s, she began her artistic career with small, stereotypical roles that did not allow her to show her true talent. However, her life changed in 1962 when she landed the role of Anita in the musical West Side Story. This breakthrough role allowed her to win the Oscar for Best Supporting Actress, becoming the first Hispanic woman to win this prestigious award.

Rita Moreno’s career has spanned over 70 years and to this day, she continues to make history through her countless contributions to the arts.

The moment when Rita Moreno won the Oscar in 1962

Since the years of her passing, Ana Mendieta (1948-1985) continues to be one of the most important figures in contemporary art. Born into a family that opposed the Castro regime, she escaped Cuba through a secret operation led by the United States government to remove thousands of children from the island. Mendieta became interested in art in the U.S. where she began her successful career. Ana Mendieta’s artwork addresses issues related to gender inequality and environmentalism and incorporates a unique combination of performance, body art, and land art.

Ana Mendieta tragically passed away in 1985 when she fell from the window of her apartment. Her husband, fellow artist Carl Andre, was accused of throwing her during an argument, however was later acquitted for lack of evidence. Today, feminist groups and contemporary art experts continue to recognize Ana Mendieta as an emblematic victim of gender violence, a feminist icon, and one of the most important performance artists in history.

Learn more about the work of Ana Mendieta

As you can see, Hispanic women have made incredible contributions to activism, social change, education, the arts, and science in the United States and across the world. Their strength, perseverance, and wisdom have not only changed history but have also opened doors for future generations of Latinas to flourish and thrive.